Water-based dip is a Train Wreck

We have written on this topic before. It seems that a large number of you have experienced hair slippage on trophies again. I will try to shed some light on the problem at hand. After you have taken your trophy on a safari in South Africa, pictures are taken and then the animal is rushed to the skinning shed where the skinning staff begins to work. The trophy is quickly skinned and sometimes washed with water and then salted. So far so good. If handled correctly, the skin would be picked up and the salt removed after the first 24 hours. Then the skin would be salted again in a second pile. This salt also stays on for 24 hours. The next day the skin is salted for the last time with new salt in a third pile. We are keeping the skins separate from the skins taken the day before or the day after. The morning of the fourth day the skins are shaken off, folded up and allowed to dry slowly. These skins should not be hung to dry. This causes skins to dry too quickly and does not allow them to cure slowly. Notice I said CURE. We are not trying to dry the skins, we are curing the skins. 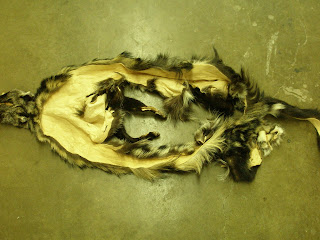 This skin was soaked in a water-based dip and re-salted.  I was at the facility when this skin was handled.


Once your hunt has finished, the skins will stay at the outfitters place for around 3 weeks. He sometimes will transport multiple safaris at once. At this time all skins and skulls are transported to a Dip and Ship facility. Here is where the problem begins. Follow me closely and understand the steps. The skins are now dipped in a saturated salt solution containing formic acid with a ph of 2.5 for a minimum of 48 hours. Next they are neutralized. Finally, they are re-salted and dusted with sodium silica fluoride and carbonyl (1-NAPHTHYL N-METHYLCARBONATE) for insects.

These skins were soaked in a water-based dip solution and re-hydrated. This step is the problem. Every tannery owner I have spoke to says getting the skins wet again at this point after they were cured will start the slippage process. After they soak the skins, they then salt and dry the skins again. Now at the tannery the skins are soaked once more to start the tanning process. Common sense tells you the skin cannot take this kind of handling before tanning. Here is where the manes begin to fall out. At this point the taxidermist informs you of the slippage on the trophies from South Africa. Most of the taxidermist that I have interviewed did not know about this handling process. They have received skins back from the tannery in this condition, but could not explain to the client what had caused the problem. Again these are taxidermist I have interviewed throughout the U.S. This is a practice that will need to change or the results will stay the same. 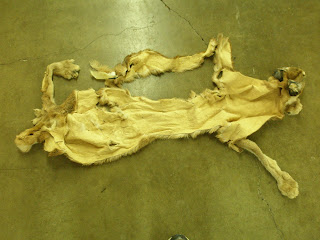 This skin was from the same facility.

At this time I have been a full time taxidermist for 36 years. I have also hunted Africa extensively for the past 18 years. South Africa is the only country where I have witnessed this practice. Places like Tanzania, Mozambique, and Botswana have very high daily rates and trophy fees. Treating skins like that in these countries would not be tolerated. The hunters that hunt these countries would not accept the entire mane being lost out of their African Lion. So you can see that skin handling is taken very seriously. I have even hunted in the rain forest of Cameroon where we took bongos. These skins were salted, and then folded up and shipped out of the country quickly because the high humidity was not a favorable condition for them. Could you imagine getting your Bongo skin back from the tannery and find the skin had slipped. Again, this would be unacceptable.

Most hunters start hunting in South Africa first. This is their first time hunting Africa, and this is what the hunting industry in South Africa depends on. These hunters have not done their homework and I found most had already made the decision to hunt with a particular outfitter. Explaining the problems awaiting them ahead is something they do not want to hear. Once the excitement wears off and the skins come back from the tannery, they are now mad. A little late, because some have already booked a hunt with the same outfitter again. The same results are sure to come. So you ask what can be done to stop this non-sense. I found that Zambia, Namibia, and a host of other countries offer the same species and great prices without the poor practice of dipping skins in a water-based dip. 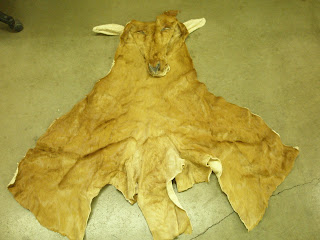 So you might ask, what should the industry do in South Africa? The dip and pack facilities need to earn a living processing the skins. They do not want to stop the process for fear of reducing their earnings. This will happen due to less hunters hunting South Africa once this practice is uncovered. In my opinion, I would rather still pay the same rate to have my skins just crated and know the skins were not in jeopardy of slipping. This seems like a much better way of doing business, but they will not change in South Africa. I found the people in the Northern Transvaal of South Africa have by far the worst success in skin handling. We have found that there is a 40% loss of trophy skins. I believe that this practice would end quickly if we paid only for the trophies that came back from the tannery in perfect condition. You would not pay any trophy fees until you and your taxidermist had seen the skins. A third party would hold the trophy fees until the hunter was satisfied with the product received. So you can see that the dipping of skins in a water-based dip is a poor and risky gamble for you. You are the only loser. I have a client at this time who has just returned from South Africa. I have verified the process used with the dip and pack facility in South Africa. I am withholding their name because it has no bearing on the issue at hand. They are not at fault for the process that has been put in place. I will use this shipment of skins to report back on, and we can see the damage inflected.

This brings us to this Tipping issue. We will address this in a future article.